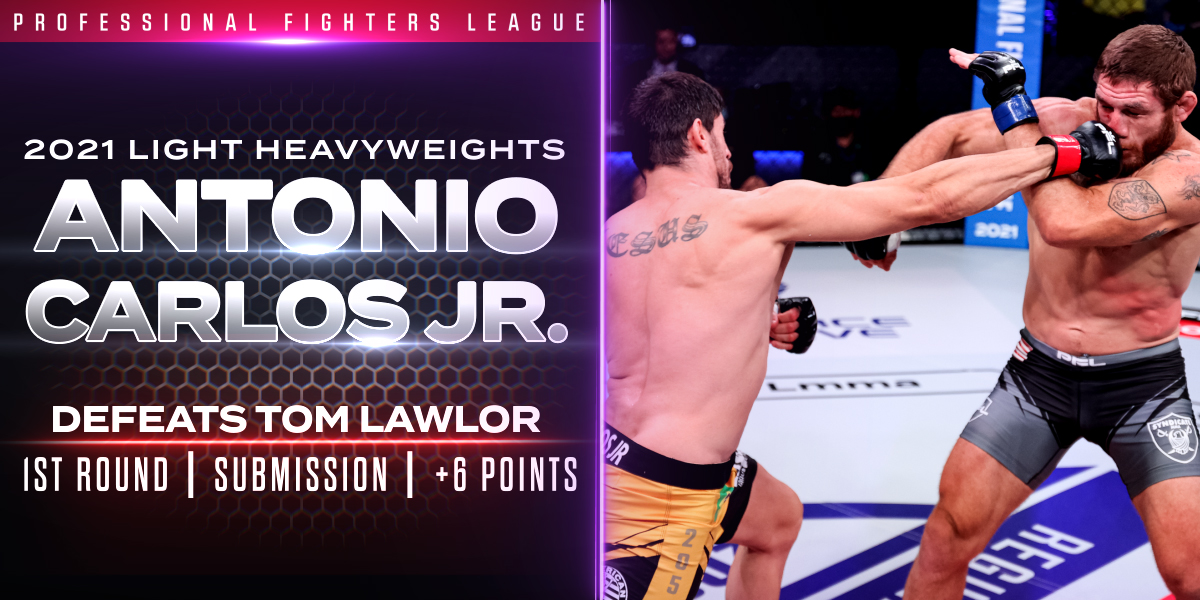 The preliminary card of the second event of the 2021 season was headlined by the league debuts of Brazilian Antonio Carlos Jr. (11-5, 1 NC) and fan-favorite Tom Lawlor (10-8, 1 NC). A winner of The Ultimate Fighter, Carlos Jr. is a decorated BJJ black belt who had secured eight of his 10 career victories via tapout. Lawlor returned to MMA competition for the first time since 2018, following a stint as a professional wrestler.

The pair exchanged jabs before Carlos Jr. unleashed a heavy body kick to the stomach of Lawlor. The Brazilian stayed long, utilizing his reach advantage and landing his jab. Lawlor pressed forward and it allowed Carlos Jr. to change levels and take the fight to the ground. From the bottom, Lawlor attacked with a guillotine choke. The experienced grappler Carlos Jr. did not panic and calmly escaped the submission attempt. Carlos Jr. slickly passed to mount and briefly looked for an arm-triangle. Lawlor scrambled to top position, but left his neck exposed and Carlos Jr. capitalized. He latched onto a guillotine choke of his own and rolled to the mount. Lawlor desperately tried to escape, but was forced to tap.

The elated “Shoeface” gained six points in the light heavyweight standings with the first-round submission.