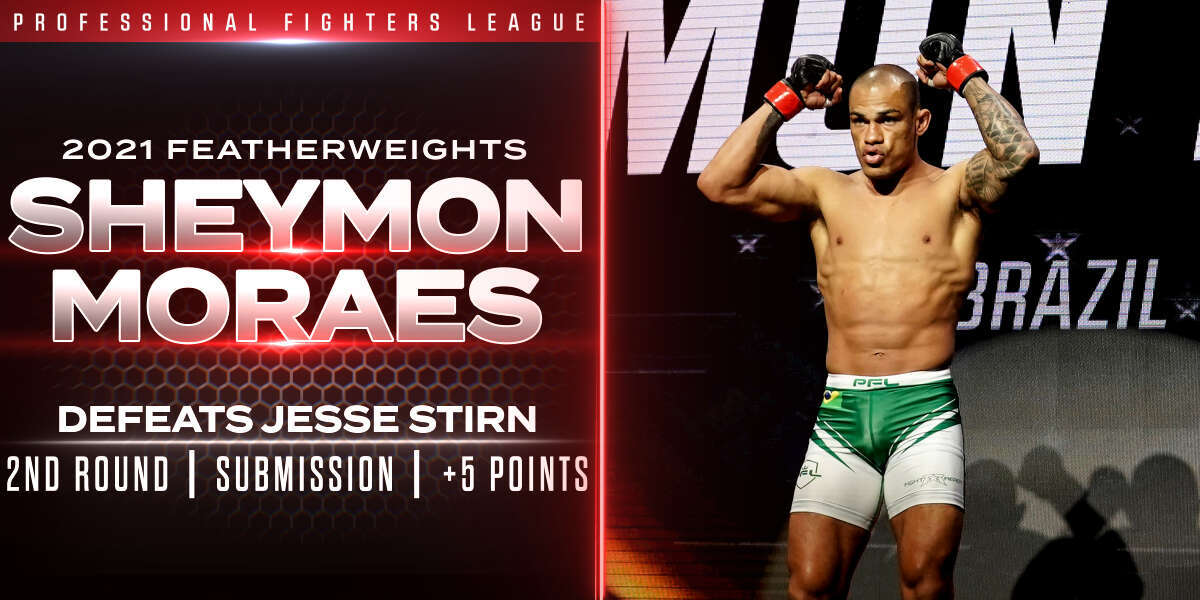 Despite losing his 2021 PFL season debut via first-round knockout against Brendan Loughnane, Sheymon Moraes entered his PFL 4, 2021 showdown against Jesse Stirn with at least three points in hand.

Wednesday morning in Atlantic City, Stirn missed weight for this featherweight bout, giving his opponent Moraes a trio of points in the featherweight rankings in the process. Due to missing weight, Stirn also lost a point and was ineligible to earn any points regardless of the outcome of the bout.

The two touch gloves and immediately get to work in the center of the cage, Stirn pumping a jab to measure distance against Moraes. Fifty seconds into the fight, Moraes throws the first official strike of the bout, a jab which glances off Stirn. Two two continue to feel each other out, with Moraes throwing a nice leg kick before Stirn follows with a beautiful sweep, landing right in side control and immediately establishing control.

Moraes shrimps to create space, regaining half guard and looking to lock up a kimura in the process. Stirn, untroubled, escaped and continued to dictate the pace with his pressure from top position. With just over a minute to go in the round, Moraes exploded back to his feet, but Stirn stayed glued to him, looking to take his back. Moares separated and initiated a clinch of his own.

With 15 seconds left in the opening round, Moraes throws Stirn to the mat, but the American immediately bounced back to his feet and returned the favor with a takedown of his own to close out the frame.

Moraes opens Round 2 with more urgency, landing a kick to Stirn’s body and following up with another to the head. Moraes then lands a strong right hand that puts Stirn on the canvas, and he follows up with strong ground-and-pound that is mostly blocked by Stirn. Smartly, Moraes allows Stirn to return to his feet, where they continue to strike at range.

Moraes digs a hook to the body, and Stirn attempts to initiate a clinch, but Moraes quickly shrugs him off and circles. Stirn, seemingly looking to regain some momentum, opens up with some strikes of his own, but he’s quickly punished with a quick counter hook from Moraes. Stirn again attempts to clinch, and again Moraes breaks away without incident. One minute left in the round, Moraes lands a nice low calf kick and follows with a left hook.

Stirn hits a nice trip and takes Moraes to the mat, where he looks to work and ride out the round on top.

Moraes hits a beautiful kimura sweep and gets the finish with just seconds left in the round. What a gorgeous transition. Moraes is hyped inside the cage, and rightly so. The submission was quick, brutal, and definitive, a beautiful demonstration of grappling prowess at work.

The win earns Moraes five points, potentially earning him a spot in the 2021 PFL Playoffs after looking like a longshot following his loss to Loughnane.