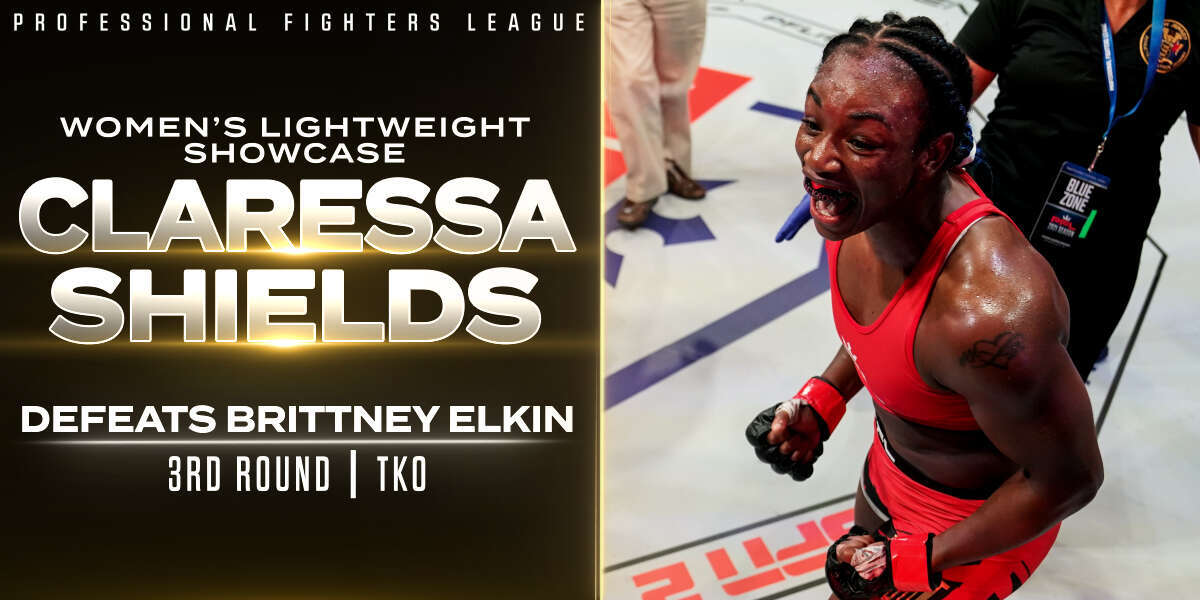 Two-time Olympic gold medalist. Three-division champion — currently. Self-proclaimed GWOAT (Greatest Woman of All Time). Shields entered the cage with all this hype and more, making her PFL debut one of the most intriguing fights of the year.

Facing Brazilian jiu-jitsu brown belt Brittney Elkin, Shields found herself in a classic “striker vs. grappler” showdown — and one discipline stole the show … before the other stole it back.

Here’s what went down.

No glove touch here. Shields stalks forward, and Elkin throws a variety of kicks to keep her opponent at bay. Shields bites on everything, cautious of the danger presented by Elkin legs. Feeling more comfortable, Shields opens up with her hands, and Elkin immediately counters with a takedown, putting Shields on her back against the cage.

This is not what Shields wanted early, but she’s back to her feet after a wall-walk. Elkin maintains the clinch though, and after a brief scramble that saw Shields on top for a moment, Elkin regains dominant position and goes to work on top of Shields.

Despite her work at Jackson Wink MMA, Shields struggles here, as Elkin methodically works to mount. While the positional advances matter, Shields has protected herself well and avoided any serious ground-and-pound or submission attempts. Elkin looked for an armbar briefly, but then went to work with ground-and-pound.

The round ends with Elkin in full mount. While Shields did not panic, demonstrating impressive composure, the round goes to Elkin easily.

Elkin opens Round 2 with the same game plan: Keep Shields away with kicks. Shields eats them and fires away with quick hands, forcing Elkin to shoot for a takedown. Shields sprawls beautifully but gets overzealous from there, pouncing with punches and giving Elkin the chance to reverse position, which she capitalizes on immediately.

She goes right back to work from full mount, and Shields is left on her back attempting to bump her off. With two minutes gone in the round, Elkin threatens an arm triangle but lets it go without expending too much energy.

Shields just has no answers from her back, as expected, and Elkin maintains the dominant position. To Shields’ credit, she’s once again composed and relaxed in this unfavorable spot, showing impressive mental fortitude. Elkin latches onto an arm and searches for the armbar, but Shields scrambles and escapes, finishing the round on top raining down punches.

Shields likely is not winning the fight, but she’s undoubtedly impressive, as she’s had every opportunity to give up an arm or her neck. She didn’t take it though, and she instead lives to fight another round.

Shields is on fire early. She looks fresh, quick, and motivated, firing away with lightning-quick hands and putting Elkin on the defensive. Elkin turtles, and Shields continues to blast away with piston-like fists to the dome, forcing the referee to take a closer look at the action.

Elkin keeps moving and squirming, but Shields is absolutely relentless, and the referee has seen enough.

IT'S ALL OVER!!! CLARESSA SHIELDS IS HERE TO STAY!#2021PFL4 pic.twitter.com/6zYPYwCGQY

There it is. Shields, after spending almost 10 full minutes on her back, mounted by a Brazilian jiu-jitsu brown belt in Elkin, survives and earns the finish in Round 3.

“I feel like I am dreaming. This is crazy,” Shields told PFL commentator Sean O’Connell after the win.

What a debut. What’s next for her from here?