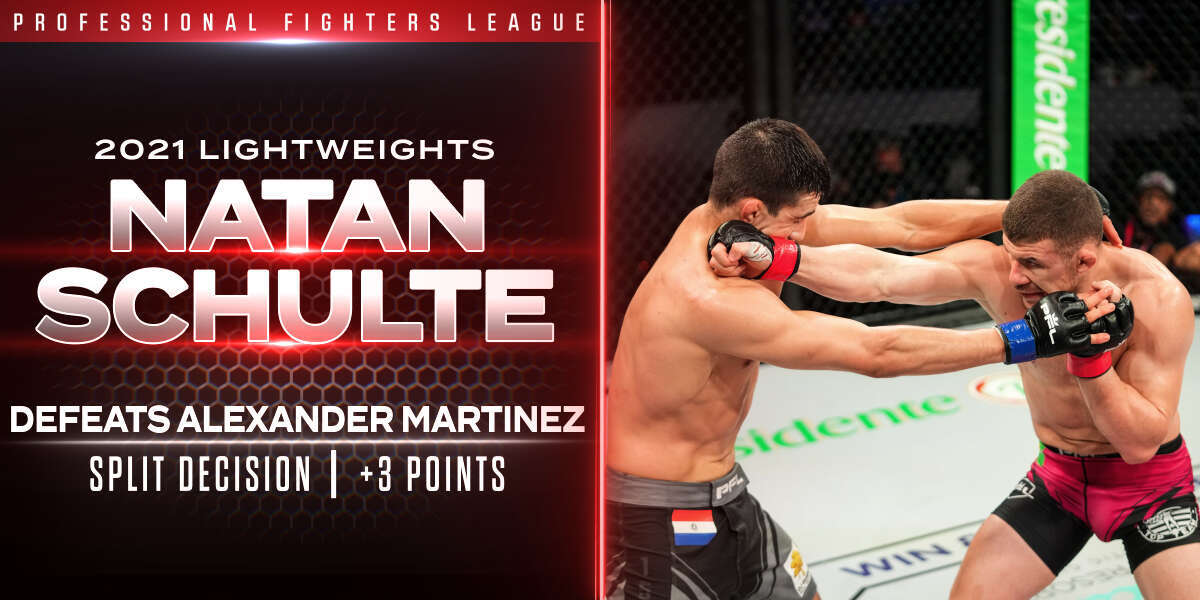 Interestingly, the scenario for Martinez was equally clear-cut: Win and you’re in.

Schulte dropped his first-round matchup of the 2021 season against Marcin Held back in April, and he needed a big, bounce-back victory to propel himself into the 2021 PFL Playoffs. While both men prepared for different opponents coming into the fight, none of that showed once the bell rang and the two got to work.

Martinez works some quick strikes feeling out the range, but Schulte changes everything with a takedown. Immediately, Schulte tries to take Martinez’s back, but Martinez smartly defends and crawls toward the cage for some additional leverage. There, Schulte lands some strikes, but Martinez takes the opportunity to escape and reverse position.

Schulte immediately springs back to his feet and plants Martinez back on the mat, again looking for the back. The two again return to their feet against the cage, but Schulte drags his opponent down once more. Martinez reverses, but again Schulte springboards to his feet, and the two trade strikes.

Martinez, the longer, rangier fighter, lands from a distance, but Schulte marches forward like the T-1000 in search of a takedown. He gets it. Schulte body locks and drags Martinez to the floor, but this time Martinez is able to return to his feet in an instant. The tables turn as Martinez attempts a takedown, but Schulte counters, and they return to standing position. A nice push kick from Martinez lands, and Schulte responds with a crisp right hand in tight.

The round ends with the two fighters exchanging blows against the cage. Fun round where each man had his moments.

Martinez appears to hurt Schulte immediately with a low calf kick, and Schulte shoots. Martinez jumps on a guillotine, but Schulte slips out and goes to work from Martinez’s full guard. A scramble ensues, and Schulte looks to take Martinez’s back. Martinez, however, shows off some slick grappling of his own, slipping out and reversing position on Schulte. He’s too high on the back, however, and Schulte shrugs him off, sending things back to the feet for a striking matchup.

Martinez opens up with more volume — primarily low kicks and punches — while Schulte looks for bigger shots. Schulte again gets Martinez to the mat briefly, but they pop back to the feet before anybody can score. Here, Martinez is clearly looking for volume, whereas Schulte is looking for power and takedowns, creating an interesting matchup as the fight unfolds.

Martinez lands a high kick followed by a low kick, and Schulte clinches with a body lock against the cage. Once again, Martinez shows smart defense and avoids any serious danger before breaking away to land on the feet, closing out the round.

Schulte presses forward like a robot once again, and Martinez opens up with some slapping punches before stepping in with a nice knee to the body. Schulte works his way inside and tosses Martinez to the canvas, where he immediately bounces back to his feet. Impressive stuff from the undefeated Martinez through 11 minutes in this one.

And just as I say that, Martinez makes arguably his first mistake of the fight, throwing a spinning heel kick at Schulte and missing. Schulte capitalizes, taking Martinez down and winding up in half guard. He goes to work from the top, but Martinez scrambles once again. Schulte counters with a back-take attempt, but Martinez avoids it and returns to his feet. Schulte trips him, but Martinez again pops up … just to see Schulte secure a single-leg and take him down once more.

Now, Schulte works from full guard while Martinez throws strikes from the bottom. Another scramble, another back-take attempt, but it all cancels out, and the two return to their feet, where Schulte secures another body lock against the cage. Schulte looks for the single and gets it, heading to work from Martinez’s half guard. Martinez again gives up his back and returns to his feet. Deja vu, anyone?

Thirty seconds left in the fight, Martinez hits a nice inside trip, but Schulte returns to his feet and returns the favor, ending the fight on top against the cage. What a scrap.

Schulte officially scored nine takedowns to Martinez’s one, but Martinez repeatedly reversed position or returned to his feet, so the judges face a tough task in naming a victor here. That fact showed, as the judges were split on the result.

With that, Schulte earns three points, and now both he and Martinez (three points apiece) will need to wait and see how the rest of the fights pan out before punching their ticket into the 2021 PFL Playoffs.